Dermody Properties, a national private equity real estate investment, development and management company focused exclusively on the logistics real estate sector, is pleased to congratulate Gene Preston, East Region Partner, on his retirement later this year. Preston joined the company in 2012 and has been responsible for the company’s land and building acquisitions, build-to-suit projects, development activities and asset management in the eastern United States. His official retirement date is December 31, 2021. 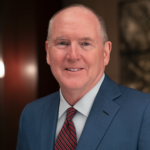 “I have tremendous respect for Gene… his outstanding accomplishments are the foundation that will enable the East Region to continue its strong growth,” said Michael C. Dermody, CEO and Chairman of Dermody Properties. “On behalf of all of us at Dermody Properties, we wish him the very best in the good years ahead.”

During his career, Preston has developed and acquired approximately 28 million square feet of industrial and logistics space representing approximately $2 billion of invested capital. Notably, Preston oversaw the acquisition of a former General Motors site in Boxwood, Del., which was later developed as the state’s largest and most advanced logistics facility. Since 2012, Preston has overseen more than 2.8 million square feet of development at LogistiCenter℠ at Logan. In 2017, he negotiated the acquisition and oversaw the development of LogistiCenter℠ at Midway, in Bethel Township, Penn., which, at the time, was the largest building in the Dermody Properties portfolio at over one million square feet. Most recently, Preston and the East Region team broke ground on a 1.1 million-square-foot industrial project in Southern New Jersey, known as LogistiCenter℠ at Woolwich.

“Dermody Properties has benefitted enormously from its association with Gene Preston. His personal and professional qualities are a positive example for the entire team,” said Douglas A. Kiersey, Jr., President of Dermody Properties. “We congratulate Gene on closing out a fulfilling, decades-long career in the industry, and a job well done.”

A respected leader, Preston served as President of the New Jersey chapter of NAIOP in 2019 and 2020, capping off his career long membership in the organization. He is a licensed real estate salesman and is a member of SIOR and its New Jersey and Pennsylvania chapters.

“I feel very fortunate to have spent nearly a decade working with the team at Dermody Properties and being a part of the company’s mission,” said Preston. “As I look forward to spending time with my family, fishing, boating, hunting, traveling and volunteering, I know our customers in the East Region and the company as a whole is in great hands and I anticipate watching Dermody Properties continue to succeed as a leader in logistics real estate development.”

Dermody Properties is a privately-owned real estate investment, development and management firm that specializes in the acquisition and development of logistics real estate in strategic locations for e-commerce fulfillment centers, third-party logistics and distribution customers. Founded in 1960, Dermody Properties has invested more than $6.2 billion of total capital across all platforms nationwide, having acquired and developed approximately 100 million square feet of logistics and industrial facilities. In addition to its corporate office in Reno, Nev., it has regional offices in northern and southern California, Atlanta, Phoenix, Seattle, Chicago, Dallas and New Jersey. For more information, visit www.Dermody.com.